Overview:  Copper Ethernet old school directly to a GB Ethernet port on the computer is the best way to connect to the LAHCF and get the full GB level of service.  When most laptops and even our latest wi-fi devices were designed and installed on laptops, computers, smart phones, the designers and engineers did not assume there would be GB level internet available.

As many “thin” laptops don’t even have a Ethernet card port, they just have a USB port  (which can be configured with an Ethernet adapter) which still can’t get information as quickly as a GB ethernet card can into the computer.  So if purchasing any new computer, confirm it has a GB (not 100 MB) Ethernet RJ45 port adapter.

Wireless technologies are still behind and many devices you have already in your network may severely limit your GB speed to your end computers.

Current highest wi-fi standard in the US is 802.11ac  for 1.3 GB speeds – Loop for wi-fi devices/routes/computers with this standard.

Industry continues to develop next generation wi-fi standards but if your wi-fi equipment on either your in house routers or your computer wi-fi is older, this will be your limiting factor.  A little bit of research looking at your adapter information will tell you what wi-fi standard of 802.11b, a, g, n, ac, etc.  Your speed will be reflect the slowest wi-fi radio in your connection.

LAHCF provides each member with a SmartRG routers.  This is the current state of art GB router that has the lately accepted wi-fi standard.  This should be used your fiber network to achieve your best wi-fi and networking speeds.  Older equipment may give you less speed results.

Below is a work-in-progress table for a forthcoming FAQ re: Wi-Fi performance. BTW the 802.11ax standard is not yet finalized (probably later this year) although a few companies have begun to sell gear with guesses at conforming to the eventual standard. You’ll definitely never see anything above 500 Mbps on 802.11ac class gear (currently he fastest available). Thus if you want to approach gigabit speed you’ll need a hardwired connection:

Connecting with a USB to Ethernet adapters

Many laptops today do not come with an Ethernet port and the only way to connect is via wi-fi or purchase a USB to Ethernet Adapter.

Once again, you need to get the latest adapter (USB 3 to gigabit Ethernet) version of this adapter and connect it in to your USB 3 port (not older USB 2 port).

You can buy these adapters many places including Target or office depot or on-line: 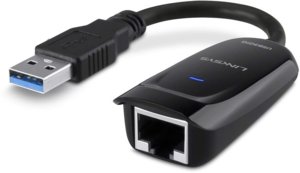 * There is a nearly-as-complex similar situation for USB as discussed here with the actual speeds far lower than the theoretical ones. Here is one example of real-world performance of one of the better for one USB3-class network adaptors: